Bitcoin has broken back above five figures again as the short lived correction appears to have abated. Analysts have weighed in on the next move for BTC, which way will it go?

Crypto markets in general have pumped over the past 24 hours adding $15 billion from intraday lows to top out at $295 billion during early trading in Asia. The next few hours will be crucial in determining whether the rally is real or the correction will resume.

Bitcoin Back Over $10k

BTC surged from $9,600 to top out just over $10,250 a few hours ago according to Tradingview.com. The move has added almost 7% on the day and has largely dispelled all correction fears. 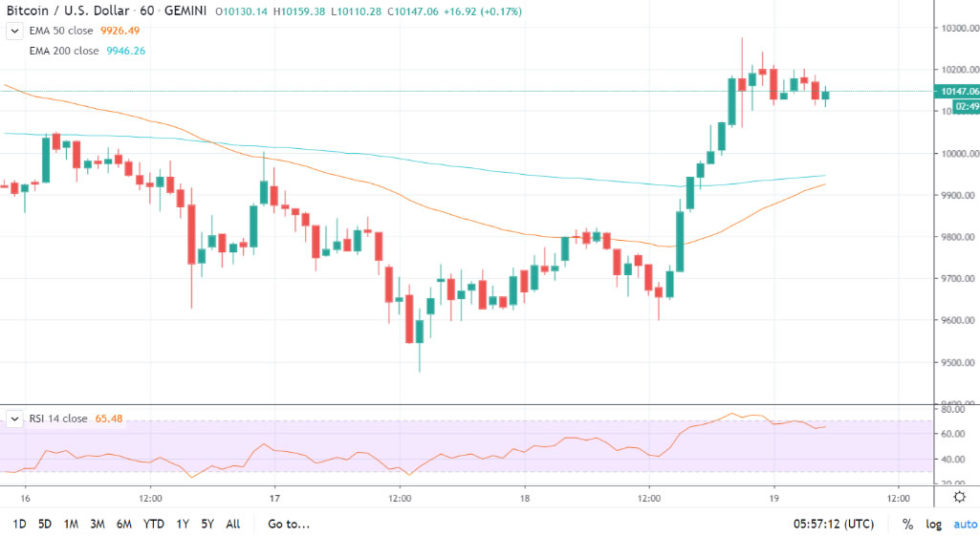 Since then bitcoin has ranged between $10,200 and $10,100 and it has to hold this level to prevent another return south.

Analysts that are leaning bullish are eyeing the $10,800 and above area as the next resistance level.

So far, so good on the symmetry move.

A golden cross has also been talked about recently which is also a major bullish indicator for longer term trend reversal. Bitcoin has been in an uptrend for seven weeks now so that momentum could continue, especially as the halving approaches.

On the bearish side is analyst ‘Crypto Jack’ who predicted the move to $10,200 but added that failure to post another higher high will result in a dump back to $8,500 as the correction accelerates.

If my assumptions are correct, this push falls short of the recent high and 8.5K is next pic.twitter.com/u2qhci8Xj3

Trading levels today will be crucial in determining the next short term direction for BTC, and a move above $10,500 is all it needs to push higher.

Altcoin gains have been mixed today but Ethereum has once again been ahead. The world’s second largest crypto asset has added almost 10% in a move from $260 to $285, at the time of writing ETH had corrected slightly to $280.

Litecoin has made a marginal move of over 4% as it chases down $80 again while Tezos keeps cranking higher adding another 6% on the day as it hovers around its all-time high at $3.45. The rest of them are in the green but moves have been marginal as all eyes are on big brother.

Other altcoins making reasonable gains over the past 24 hours include Chainlink, Huobi Token, OKB, and ICON.

Will bitcoin carry on correcting or surge even higher? Add your predictions below.

[ad_1] People often criticize Bitcoin for its volatility, not realizing that the coin is still in development, but investing in it is investing in a better future. Bottoms Up When it comes to Bitcoin investments, […]

XRP Has Just Broken Past a Crucial Downtrend, But Don’t Bet on a Rally

[ad_1] Bitcoin, Ethereum, along with many other cryptocurrencies have done well in 2020. Yet the same cannot be said for XRP, which is down by approximately 10% since the start of the year. The fourth-largest […]

Bitcoin Triangle Threatens To Crash Bitcoin – Will It?

Check out the Cryptocurrency Technical Analysis Academy here: In this video we do some long term Bitcoin technical analysis on the … source YouTube