Bitcoin’s price has been on a wild ride this week. So far, January definitely doesn’t disappoint in terms of volatility and excitement. Seven days ago, Bitcoin was trading at slightly above $7,300. As the week progressed, however, its price shot up to $8,400 only to pull back down to $7,700 from where it’s currently recovering.

At the time of this writing, Bitcoin’s price stands above $8,000 but it’s interesting to see where it will go from here. On another note, this week was particularly intense in terms of political events as well. The US President Donald Trump ordered an airstrike against Baghdad’s Airport, which had the General of Iran’s Revolutionary Guard’s Quds Force killed.

This unfolded a very interesting correlation between Gold, Bitcoin, and Oil. The price of all those assets shot up amid the rising market uncertainty. This caused a lot of people to believe that Bitcoin is, indeed, starting to be perceived as a store of value.

On a completely separate note, there has been quite a lot of development in terms of regulations. Qatar issued a blanket ban on both cryptocurrencies and assets which have value and could substitute fiat currencies. The President of the European Central Bank said that they are looking into launching their own central bank digital currency but don’t want to interfere with other digital assets.

In the altcoin arena, things have been relatively turbulent as well. A lot of the altcoins experienced serious price swings. In general, however, they failed to break any serious grounds as Bitcoin’s dominance remains well over 68%. 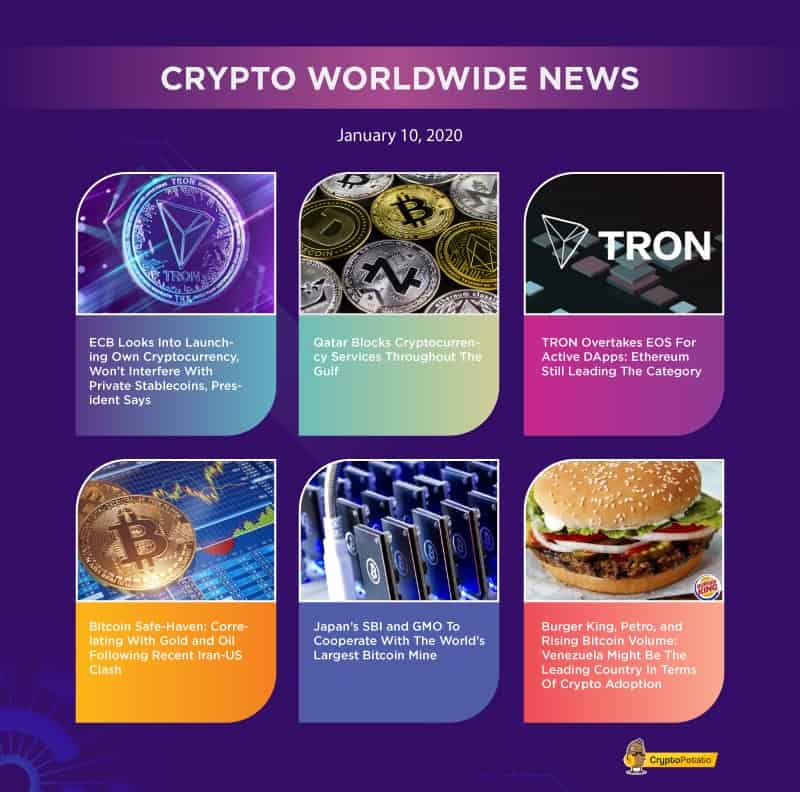 ECB Looks Into Launching Own Cryptocurrency, Won’t Interfere With Private Stablecoins, President Says. The president of the European Central Bank said that they are considering the launch of its own central bank digital currency (CBDC). Christine Lagarde also outlined that this doesn’t mean that they will interfere with any private companies in coming up with similar forms of payment.

Qatar Blocks Cryptocurrency Services Throughout The Gulf. Qatar’s Financial Center, which is also the nation’s regulatory authority, has issued a blanket ban for services related to cryptocurrencies. Moreover, the prohibition also covers anything which has value and could substitute fiat currencies.

TRON Overtakes EOS For Active DApps: Ethereum Still Leading The Category. The increasing and ongoing development of decentralized applications are surely among the things which push mass adoption further. According to a recent report, TRON has managed to overtake EOS in terms of active DApps, but Ethereum remains well ahead in the lead.

Bitcoin Safe-Haven: Correlating With Gold and Oil Following Recent Iran-US Clash. This week was nothing but intensive in terms of news coming from the Middle East. The US launched an airstrike against Iran and managed to kill General Qasem Soleimani – the leader of the country’s Revolutionary Guard’s Quds Force. Following the news, Bitcoin, oil, and gold all surged.

Japan’s SBI and GMO To Cooperate With The World’s Largest Bitcoin Mine. Two of the largest corporations in Japan, SBI Holdings and GMO Internet Inc., have ventured into Bitcoin mining. This happened through a collaboration between the companies and Northern Bitcoin AG – the world’s largest Bitcoin mine.

Burger King, Petro, And Rising Bitcoin Volume: Venezuela Might Be The Leading Country In Terms Of Crypto Adoption. Cryptocurrency adoption is a hot topic among the community and it seems that it’s catching up to speed. Most recently, Burger King announced they’d allow their clients to pay with Bitcoin and other cryptos. Meanwhile, things in Venezuela are also escalating and it appears that the country is one of the leading when it comes to cryptocurrency adoption.

This week we have a chart analysis of Bitcoin, Ethereum, Ripple, Tezos, and Bitcoin SV – click here for the full price analysis.

Click here to start trading on BitMEX exchange and receive 10% discount on fees for 6 months.

XTZ Up 52% In November, How Much Higher Can It Get?

[ad_1] Summary Tezos has been surging this month after increasing by 52% to reach the current price of $1.25. The momentum is certainly on the side of the buyers against Bitcoin. Tezos must pass a […]

Demand On The Rise? ‘Buy Bitcoin’ Surges On Google Trends Ahead Of The Halving

[ad_1] Days before the third-ever Bitcoin halving, the interest towards the primary cryptocurrency has surged, according to Google trends. The phrase “buy Bitcoin” is getting very close to the previous two-year high levels of June […]

XRP Rebounds Upon $0.40 As Volatility Increases

[ad_1] The past 24 hours have seen a particularly volatile period of trading on the cryptocurrency market after Bitcoin poked its nose above $9,000 only to crash moments later toward the $8,200 level. The majority […]