Blockchain took it on the chin this week as several big names in the industry speculated that the technology that underpins Bitcoin and other cryptocurrencies has been over-hyped. Meltem Demirors, CIO of CoinShares Group, even went so far as to declare blockchain “dead.”

Don’t Start Eulogizing Blockchain Quite Yet

Demirors, along with more than a thousand enthusiasts, investors, financial managers, regulators, and other movers and shakers in the crypto space, were on hand at this year’s Invest: NYC conference on Tuesday.

Elaborating on the demise of blockchain, she explained:

“After two, three years of spending a lot of money on this and a lot of investment dollars going into this, I think the bigger question as an investor is: What’s the scalable revenue model and is there equity value that’s created in these businesses? And arguably the answer is: not yet.”

I have an immense amount of respect for Demirors. She is one of the most influential women in crypto and knows far more about its intricacies than I ever will. She’s also taught courses on blockchain strategy at Oxford and is a member of the World Economic Forum’s Blockchain Council, which is why her comments stuck out so much.

While her arguments about scalable revenue models and equity value with respect to a lot of blockchain startups is spot on, her assertion that the technology is dead is just…well…WRONG.

Blockchain and the Dotcom Bubble

I’m 47 years old, which makes me not quite older than dirt. I remember the dotcom bubble very well – in fact, I got my start as a web developer right about the same time.

Back then, investors were throwing money at online business ventures left and right. If your business had “.com” at the end of it, there was a good chance that you could find someone, somewhere to invest in it. Some business ideas had merit, while others should have never seen the light of day.

When the bubble finally burst, it did so in spectacular fashion. In less than a year, the Dow Jones Internet Index fell by more than 72 percent, and internet companies were dropping like flies. Even otherwise successful online companies saw their stock values plummet, and the Internet was declared “dead.”

In hindsight, the bubble bursting was a huge gift for the development of the Internet. All of the rubbish projects, fly-by-nighters, and get-rich-quick folks fell by the wayside, and real-world use cases began to emerge.

That’s what is happening with blockchain. I’m not saying the bubble has burst, but some air is being let out, which isn’t necessarily a bad thing. The “Long Island Blockchains” of the space are slinking away, as are those companies who thought that they could ride the hype all the way to the bank. 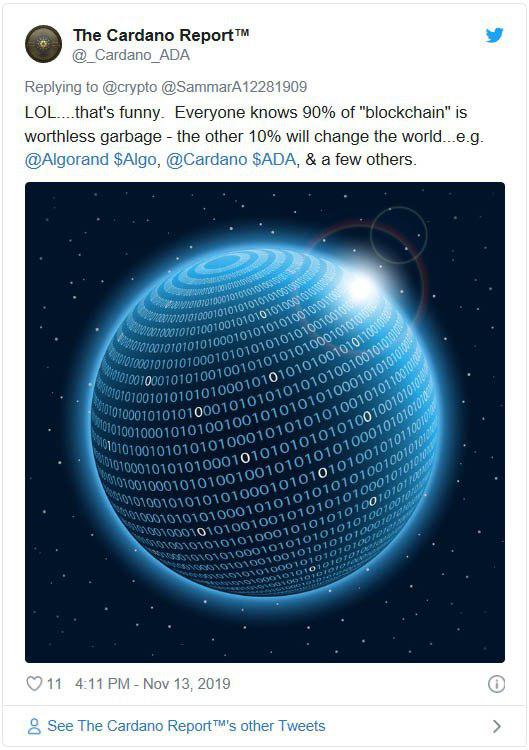 So What is the Current State of Blockchain?

Blockchain isn’t dead, folks. It doesn’t even have the sniffles. The developments in the space may not be as sexy as a cryptocurrency going up 10x in value in a month, but they are happening quickly and in increasing numbers. Published last month, Deloitte’s 2019 Global Blockchain Survey offers some insights that point to a very optimistic future for blockchain technology.

The survey polled 1,386 senior-level executives in 10 industry groupings from around the world. Some of the key findings include:

What’s more, the country plans to significantly increase its blockchain investments, to the tune of more than $2 billion by 2023.

Not bad for a “dead” technology.

Binance Futures Leading As BitMEX Down 30%

[ad_1] Although the cryptocurrency spot and derivatives trading volume declined on most platforms in September, Binance has taken the lead as the largest derivatives exchange, a new report revealed. Simultaneously, the regulated Chicago Mercantile Exchange […]

[ad_1] Boerse Stuttgart is the second-largest exchange in Germany. According to an official release, the venue has launched an unprecedented product in the cryptocurrency industry. The new tracker has a product value that represents the […]

[ad_1] Trading cryptocurrency has become increasingly popular ever since Bitcoin skyrocketed to $20,000 in 2017. However, what followed was a prolonged bear market, and the demand for trading services that allow users to capitalize on […]